When I tell Hannah Logan Peterson that her short film, Daughter, moved me to tears, I’m not exaggerating. Chosen as the selection of The Spark 2.0—an initiative sponsored by Lexus and ELLE to showcase an original short film by a woman director—Daughter runs four minutes, but it reverberates with emotion, authenticity and gravitas. “That’s what I hoped this film would do,” said Peterson, whose goal was to create a reflective space where people might see themselves, and perhaps even meditate on how to navigate their world.

In just two scenes, the LA-based director and writer captures snippets of ordinary life between a mother and daughter that most of us will recognize—especially after endless days of working from home during the pandemic. The evocative piece quietly shows us what Peterson calls a “mundane” moment or two, daily happenings that somehow mean both nothing and everything. “I wanted to focus on our everyday interactions with technology and how we raise kind, thoughtful children in an increasingly digital world,” says Peterson. As a viewer, for me, the film dredged up feelings of contentedness, guilt, liberation, empowerment, joy and forgiveness all at once. It reminded me that duality is what we live everyday (and that’s okay) and underscored that being a mother requires a plentitude of hats. As Peterson shows, each chapeau is beautiful and meaningful.

Tasked by Lexus and ELLE with contemplating female empowerment as well as the relationship between technology and humanity, Peterson says that she immediately imagined a visual dialogue between a mother and a daughter. “I realized how much technology partners with motherhood,”she says, explaining that she wanted to present technology as something positive, fluid, and feminine, not disruptive, destructive, or abrupt.

As Peterson (who is not a mother, but is, as she said, “a daughter”) and I recount all the wonderful ways technology helps us, she tells me that her sister is pregnant, and that half of her baby registry is made up of tech. We chat about how much technology, from breast pumps to tablets, has the capability to enhance motherhood. “We can actually get something done that way,” I say, admitting to her that while one part of the film awakened in me guilty memories of turning to technology for babysitting, the end reminded me that I also was a wild and free mother—a good mother—in other moments, something that balanced out any reliance on technology I used to survive.

“It can be terrifying to place so much trust in machines,” says Peterson. But, she makes it clear that there is no right or wrong—only contemplation. “It is about coming to terms with ambiguity and starting from there,” she says. Indeed, her short provides a space to think about all things: both the ease and the fears.

In crafting her story, Peterson considered both the sleek form and the socially conscious mission of the RZ, Lexus’ first fully electric car as metaphor. “I wanted to ground this story in emotional reality because lately I have been feeling that I don’t want to escape so much as I want to reckon with reality and learn to be part of the change in our world,” she explains. The new RZ is just that—not merely a vehicle for transport, but a vehicle toward change. As the paragon of innovation and luxury, the RZ is touted to be the first step in Lexus’ mission to engineer all-electric vehicles in every segment globally, while maintaining the luxury brand’s storied intuitive technology, reliability, unparalleled safety record, exquisite craftsmanship and beauty. In the vehicle’s development, Lexus placed people at the center. The luxury brand continually explores people interact with technology and with each other. Lexus, as well as the filmmaker understand the humanity of change and inherent need for connection. So, it makes sense that in the film, when we see the RZ transport the characters move together from one scene to another, from home to dreamy nature, soulfulness, grounding—even redemption—we view it as a clear symbol for a better future. 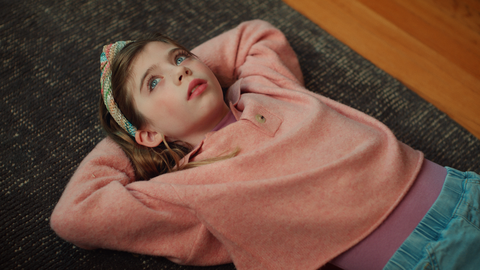 Peterson’s film, a glimpse into a normal afternoon, delivers us into the home of elegantly, but casually, clad Nadia, who sits at her computer finishing up her workday in an uncluttered home—an aesthetic that mirrors her Lexus RZ. Peterson noted that chic/functional fashion played a role in how she envisioned Nadia; it was the starting block, along with the RZ, for the mood of the piece. Waiting for her mother, Nadia’s daughter, Momi patiently draws a horse on her tablet.

Nadia finishes her work, and surveys the various machines that have “cared” for Momi. We sense that she’s grateful for the role they’ve played, that they’ve supported her as she tried to build a better future for her and her daughter.

Tidying up, Nadia picks up the tablet and sees a horse, a large Appaloosa, in a meadow, illuminated by a sunset. It seems like an invitation. Later, Nadia straps Momi safely into the RZ, which symbolizes their transportation to the other part of their lives—in this case, the next scene. The two quickly drive down a road into a nature-rich landscape. Momi looks up to the sky, through the RZ’s panoramic glass roof. On the open road, they seem bonded and playful, on a mission together.

They arrive at a meadow at sunset. Is it déjà vu? Out of the car Momi runs into the vastness, Nadia behind her. They stop when they come across an Appaloosa horse, just like the one in the drawing. Nadia picks up Momi and they approach the horse. Is it dream or reality? It doesn’t matter. 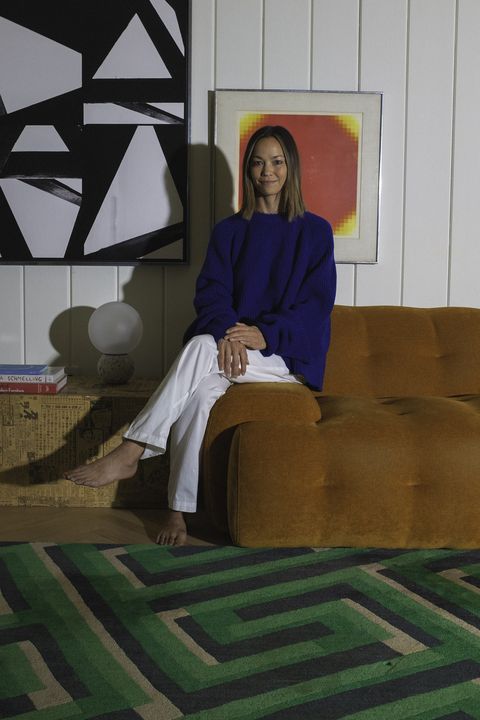 Hannah Peterson was named one of the top 25 new faces of Independent film by Filmmaker Magazine. She has a BA in Screen Studies from the New School and an MFA in Film Direction from California Institute of the Arts (Cal Arts). Her work has screened at Sundance Film Festival, MoMA, REDCST, and Tribeca Film Festival, where she garnered the AGBO Fellowship for her short film East of the River.

The other women directors tapped by Lexus and ELLE to cover themes of female empowerment and the intersection of humanity and technology created outstanding video, as well. Don’t miss the work of the runner ups: Haohao Yan, Jillian Iscaro and Suha Araj.