Sony announces 13 more launch titles for the PlayStation VR2, the total is now over 30

When Sony unveiled the PlayStation VR2, it announced several launch titles including heavy-hitters like Horizon Call of the Mountain, Resident Evil: Village and No Man’s Sky. Since then it added 11 more titles to the list and has confirmed that Grand Turismo 7 will also be part of the VR experience through a free update. All racing modes will be supported except for split-screen multiplayer for obvious reasons (online multiplayer will work, though).

Anyway, Sony keeps expanding the list of launch titles. The PSVR2 is set to ship on February 22, these games will be released through March. Today’s announcement brings 13 new titles, let’s have a quick look.

Kayak VR: Mirage is more VR sightseeing than it is a game – you and your trusty kayak paddle through canyons in Australia, ice caves in Antarctica, alongside dolphins in Costa Rica and more. There is a race mode, but this seems designed to show off the advanced graphics rendered by the PS5 and the beautiful image of the headset’s HDR OLED displays (2,000 x 2,040px per eye, 90/120Hz, 110° FoV).

Before Your Eyes is another technology demonstrator, this one in the form of a puzzle game. It makes use of the headset’s eye tracking – every time you blink you will jump forward in time, just a second or as much as 5 years.

Many of the games on this list originally launched on the PSVR and have been updated to make use of the extra processing power of the PS5 and the extra fidelity enabled by the new headset.

Pavlov VR supports a variety of gameplay styles – from an asymmetric 1vs. all, through 3 vs. zombie waves co-op, to driving tanks.

The highly popular Beat Saber will be available on the PSVR2, but there is another rhythm game too, Synth Riders: Remastered Edition, with improved visuals and haptics. This is a free upgrade to the original PSVR version and will work with any song DLCs you have. There’s Thumper too, of course.

Song in the Smoke: Rekindled is also adding support for the PSVR2, having previously been featured on the original headset. It is a VR survival action-adventure that will have your getting close and personal with beasts with big teeth and claws.

The other titles are Puzzling Places, NFL Pro Era, What the Bat?, Rez Infinite,Tetris Effect: Connected, Creed: Rise to Glory – Championship Edition and The Last Clockwinder. You can check out more details over on the PlayStation blog.

In total, there are over 30 games that will be available at launch. Some new, others remastered from the PSVR, others still getting VR support for the first time. 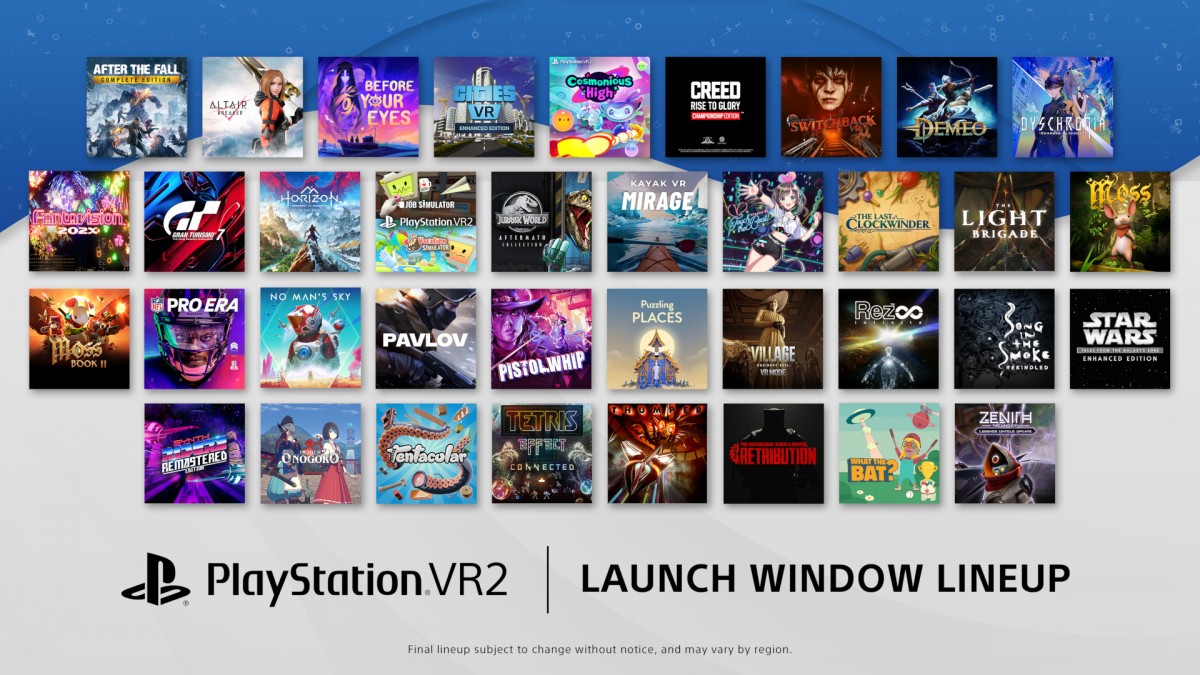