Motorola unveiled the Edge 30 Fusion and Edge 30 Neo smartphones for the global market last week, and now a new smartphone is heading to the international scene. The Moto E22 appeared in leaked renders, revealing a dual-camera setup at the back and three color options.

The E22 will be sold in White, Light Blue, and Dark Blue and will be an extremely affordable device, with rumors suggesting a price of around $125. 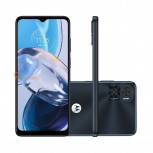 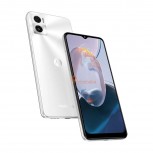 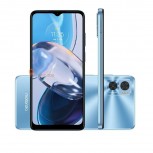 The Moto E22 camera island looks a lot like the Edge 30 Neo with the two differently colored squares but the LED flash and the writing on the island confirm it is a new phone. The source also says the Moto logo on the back is for aesthetic purposes and the fingerprint scanner is on the side, mounted on the power key.

The images also reveal a waterdrop notch on the LCD for the selfie camera. The source said there is a 3.5 mm audio jack on top, while the bottom has the speaker grille, a microphone and the USB-C port. Sadly, there are no specs but the source claims there will be a Helio G37 chipset and a 5,000 mAh battery on the inside.