Home » blogs » Insta360 One RS Review: Not Perfect, But Lots to Love
Cameras

Insta360 One RS Review: Not Perfect, But Lots to Love

Every year, action camera companies come out with new and, often, incrementally improved models that fix a few things and keep the rest the same. Insta360’s One RS is a different kind of action camera that has swappable modules for future flexibility.

The Insta360 One RS is designed to be a modular system where a complete unit comprises a Core display piece, a lens piece, and the battery base that both of these sit on. With that in mind, the Insta360 One RS can actually be a few different types of cameras depending on the lens unit used. There’s a 5.7K 360-degree lens module, a 4K Boost lens module, and a 1-inch Wide Angle lens module. 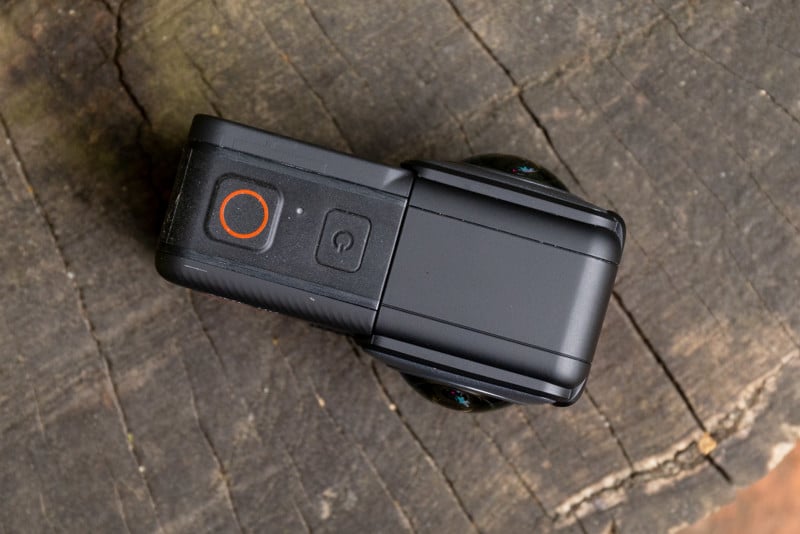 The three pieces that complete the system are easy to attach and detach, yet I never had any incidents or worries about accidental detachment. The battery base uses a simple sliding switch to unlock, and the display and lens detach by pulling them apart. For more security and overall added usefulness, the system comes with a mounting bracket that not only locks everything together behind a swinging door but has a heat-dissipating design and a microphone windscreen cover.

The mounting bracket is what adds the two-prong accessory attachment point since they aren’t on the device itself like with GoPro action cameras. In use, what’s good about this is that I can open the mounting bracket door and slide out the One RS without having to take off the bracket from whatever it’s currently attached to; I can’t do that with the GoPro. So if I want to swap the 360-degree lens for the Boost lens, it’s very speedy and I don’t have to reattach my mount.

Looking closer at the build quality, almost everything appears to be either plastic, rubber, or glass on the outside. Insta360 claims that the One RS is waterproof down to 16 feet (4.9 meters) underwater, which is impressive considering there doesn’t seem to be a ton of tight sealing around the electrical hookups that attach the battery to the battery base or the Core to the lens unit. Apparently, it’s only considered waterproof with the bracket on, but I don’t see any obvious way it improves the sealing anywhere. I’ve put the One RS underwater at the beach, and really the only thing that went wrong is how much sand gets stuck in all the little edges. 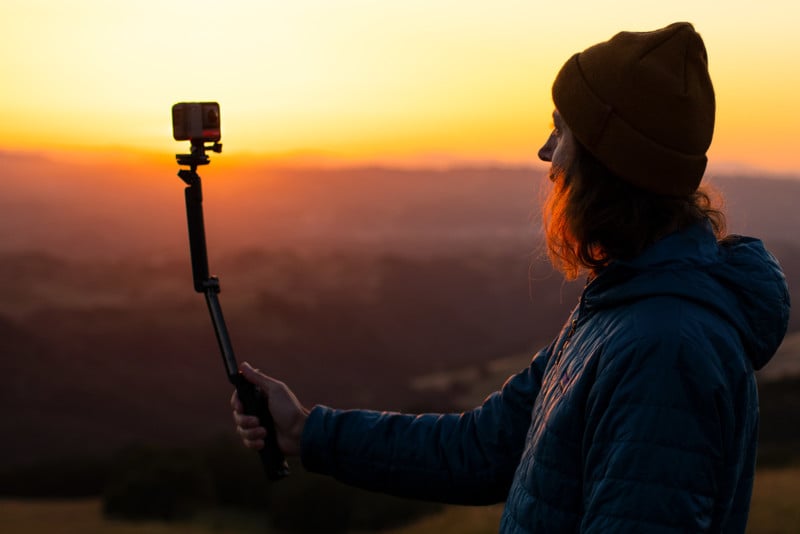 I’ve had the One RS for a few months now, and it’s usually thrown into the side of my hiking backpack with the lens and display exposed to the bag. Like this, it hasn’t developed scratches — good news because the glass is not user-replaceable. The 360 lens does come with a rubber cover since the two bubbling lenses do not easily avoid contact when you place it anywhere. The bad part is that the cover is poorly designed as it picks up all sorts of lint and dirt and anything that you don’t want rubbing against the lens, easily falls off, and I guarantee you will lose it quickly. I almost lose it every time I use the One RS, and sometimes that means retracing my steps to find where it fell off on the trail.

The rechargeable lithium-ion battery base has a 1,445 mAh capacity. It takes a little over an hour to recharge when the battery is low, and this is done through a USB-C port on the Core module while the battery base is hooked up to it. Battery life will vary depending on how the One RS is being used, whether that’s primarily for stills shooting or doing lengthy 6K Widescreen videos with the Boost lens. My review unit came with a single battery base, and it has always been adequate for me in the months I’ve been using it primarily for video. The one battery lasts me through day trips where I can recharge at the end of the night. Additional batteries only cost $30, which is fair given how far one gets me. 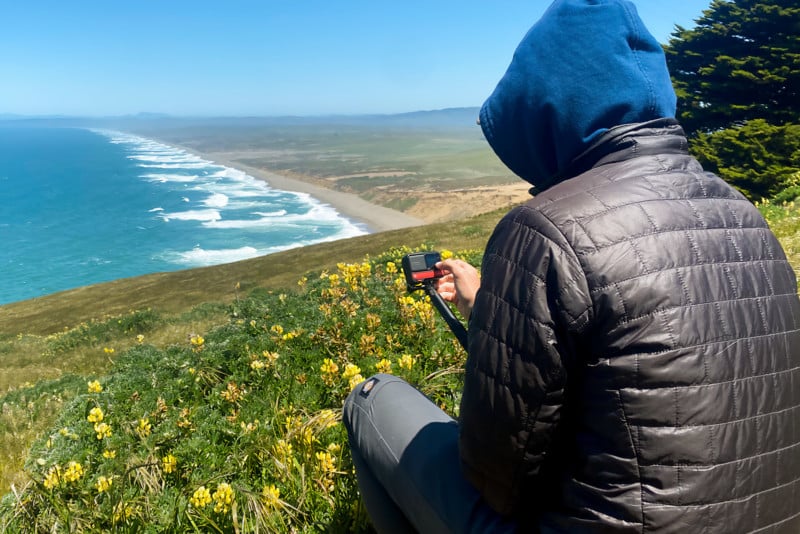 I used the 4K Boost lens and the 5.7K 360 lens for this review. There’s also a third lens module, a wide-angle lens co-engineered with Leica that packs a 5.3K 1-inch sensor, however that was not included in my review kit.

I’ll start with the 360 lens first because when it comes to talking about image quality, it gets confusing as to what we are even really getting out of it. On the video side of things, it’s labeled as a 5.7K lens. That’s technically true, but it’s counting the entire double-lens, 360-degree field of view frame, which isn’t really a usable piece of footage yet. After taking the raw 360-degree footage and reframing it into a standard-looking horizontal frame, the resolution output is 1080p. Strangely, the output is always 1080p whether the original footage is shot in 5.7K, 4K, or 3K. Based on the quality of the footage, I assume that the 5.7K output is a native 1080p, and the others are being upscaled.

Below are some video samples of using the 360 lens. It should be readily apparent that its strength is not image quality. Details are easily washed out, and there are persistent noise and compression artifacts no matter the lighting conditions. Photos show strong color fringing and “smeary” edges.

What redeems the 360 lens is its ability to be set somewhere to record and then later in post add in movements, reframe the composition to either in front or behind the camera or continuously track moving objects. The Insta360 Studio app on the computer makes keyframing this all out simple.

Another issue with the 360 lens is that the stitching between the two lenses is almost always apparent in the final reframed footage. That does put a little bit of a damper on being able to reframe the camera in any direction because pointing it out to the sides is going to show a long seam through the video. The One RS needs to point in the generally correct direction for the cleanest-looking footage.

The 4K Boost lens is much more straightforward and has frame rates that make sense. This module has a 48-megapixel 1/2-inch sensor, and while the resulting images are still not terrific quality, it’s an improvement over the 360 lens. Noise is noticeable at all ISO settings, and finer details just don’t get resolved.

For me, the Boost lens was the go-to for cleaner-looking shots. It can shoot photos that don’t look completely distorted with much higher image quality. Of course, I lose out on the reframing power of the 360 lens, but that’s not something that’s always going to be necessary.

Better at Some Things Than Others

Having a 360-degree camera in a small form factor makes creating content so much easier than a standard action camera. I’ve brought it with me on several occasions to capture behind-the-scenes footage where I didn’t want to fuss over the positioning or deal with compositions while my focus was elsewhere. Below are a couple of examples of the Insta360 behind-the-scenes footage mixed into a larger project shot with my primary camera.

The One RS has figured out how to get the best experience for a 360-degree camera through capture and the software, so it’s an excellent place to start and get hooked. The company even figured out proper sequential file naming even through formatting a card — something I’ve never seen a microSD device do before. The multi-use capabilities in the modular system also mean I can always switch things up without buying totally different cameras with different accessories.

It’s not a perfect camera, though, and the image quality will turn some people off. I find it a tradeoff where I’m at least getting a shot because of its ease of use instead of dealing with a more complicated setup that I probably wouldn’t bother with.

The Insta360 One RS is the updated version of the previously released One R. Due to the modular capabilities between the One R and One RS, many pieces are interchangeable. Insta360 has a support document that makes sense of the two cameras and their components’ compatibility.

Beyond this, the idea of a modular 360-degree camera that can also switch to a regular action camera with a few other tricks to boot has no alternatives that I’m aware of. If the flexibility isn’t critical, either going with a straight-up action camera like a GoPro HERO 10 or a pure 360 camera like a Insta360 ONE X2 would be worth checking out.

Yes. The Insta360 One RS is not going to match toe-to-toe with the image quality coming from a larger-sensor camera, but I still keep returning to using it repeatedly. It’s so simple to capture an entire scene with the 360 lens for reframing video later or switching it out and using the 4K Boost lens for a better image with less distortion.